Are you a new owner of an Instant Pot or haven’t been able to figure out how to use one yet? The key to using an Instant Pot is determining between two types of release methods: Quick and Natural. Throughout this article, you will be learning how to natural release an instant pot and the differences between the natural and quick release methods.

What Does Natural Release and Quick Release Mean?

Natural release is when you let an electric cooker slowly release its pressure and steam so that it can cool down.

Quick Release is when you manually let out the pressure and stream of the electric cooker. This type of release is much quicker than the natural release.

How to Natural Release an Instant Pot

After the cooking cycle is completed, the Instant Pot will beep to signal its completion. After that, most models of Instant Pot will automatically begin the natural release process. This entails opening a valve to let a small stream of the steam escape.

After the steam has escaped and the pressure is released, the float valve will drop further into the lid. A float valve is a metallic cylinder that allows the steam to escape. When this valve drops, the lid will unlock so that you can access your food.

Difference Between Quick and Natural Release

Quick-release (as the name suggests) is a faster way of letting out the pressure in the Instant Pot. As a result, the food doesn’t keep on cooking like if you had used the natural release.

The time that it takes each method to completely release the steam depends on the type of food inside.

You can always choose which type of release that you would like to do (whether you are in a hurry or you just prefer one method over the other), but make sure to adjust the cooking time accordingly.

A natural release is the easiest method to release pressure. Most Instant Pots and other types of electric cookers will have this release method as the default setting. During a natural release, the Instant Pot will automatically open the float valve just enough that a slow wisp of steam escapes.

In contrast, for a quick release, you are required to turn the knob from Sealed to Venting Position. This allows for a sudden, powerful geyser of steam to shoot up. For safety reasons, I would recommend using something (whether it is an oven mitt, tongs, spoon, or dry towel) to cover your hands when you turn the knob. The steam is very hot and pressurized.

What Foods to Use Each Method On

Natural release allows the food to sit and cook longer. As a result, more delicate foods are not appropriate for this method because they may become overcooked. It is best to use this method on pasta, grains, soups, broths, and other foamy or liquidy foods. This method is also good to cook meats because it allows them to sit in their juices. This allows the meat to remain juicy and more tender.

Quick-release is best for more delicate foods. Some examples include fish, shellfish, and certain vegetables that tend to overcook easily (such as broccoli, asparagus, corn, and sweet potatoes). It is best to not use this method on any food that is liquidy, foamy, or fatty because it will shoot out of the floating valve and make a mess.

Overall, the method that you use depends on how you prefer your food cooked.

Other Methods of Pressure Release

The natural release and quick release methods aren’t the only methods to release the pressure from electric cookers. Below, I will briefly explain two other steam-release methods.

This method uses both natural and quick pressure release methods.

To do this type of pressure release, you will first use the natural release for a certain amount of time. Ten minutes would be a good starting point, but the amount of time really depends on the size, quantity, and type of food inside. After the allotted time is up, you will use the quick release method to finish releasing the steam.

This method entails opening and then closing the valve (using the knob) to quickly let out steam but without all of the splatters that would occur in the quick release method. You usually just need to open and close the valve 2-3 times before the pressure has decreased enough to open the lid. If you are seeing a lot of foam coming up, shut the valve for 1-2 minutes before opening it again.

Naturally releasing your instant pot is easy and in many cases automatic. As to whether a quick or natural release is better, there are a few foods to avoid for each method, but overall it depends on your preference. 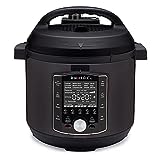