If you are wondering how to use a Gamecube controller on a PC, you know about internal conflict. Sure, you love your computer, but this retro controller is calling your name. Well, luckily for you, this guide contains everything you need to know about combining your two seemingly incompatible desires. You’ll just need to buy a specific kind of adapter and alter a few settings on your computer.

Obviously, you will need a Gamecube controller. If you already own one, skip to the next step. Seeing as the GameCube is a retro console, Nintendo doesn’t manufacture the controllers anymore. You aren’t likely to find a brand new Nintendo controller, is what I am saying. So the first step will be to buy a used or third-party controller online if you don’t already have one or the other. Both are solid options. You can buy a used controller someone is selling, or if you want a new controller, you can buy a new third-party version of the controller. Cippon is a company from which you can get one.

Buy a Gamecube to PC Adapter

Now, this might go without saying, but you can’t just plug a Gamecube controller into your computer. So you are going to need to invest in a special kind of adapter that allows you to do this. There are two different versions of this adapter. One is older and was designed to hook up GameCube controllers to the Wii U and PCs. The newer one can also be used on the Nintendo switch. It is more current and thus more expensive, but if you own a switch and are planning on using your controller along with that as well, you might be wise to just invest in the newer adapter.

Set up the Adapter

Next, you will need to set up the adapter. If you are not using an official Nintendo adapter, you will need to flip the switch—just a regular old switch, not the Nintendo Switch—to PC mode. Plug in the adapter using the USB port on your computer. The drivers should install automatically. Then plug the Gamecube controller into the other end of the adapter. You’ll probably want to use the left port, which is designated as port one.

Set up the Controller in your PC’s Operating System

Set up the Emulator of Your Choice

Now, you just need to download an emulator to play whatever game you want. The emulator Dolphin is a safe bet. Once you have Dolphin downloaded, you should see your controller in the devices list while setting up your controller settings. This should be true for other emulators as well, generally speaking. The adapter fools your PC into thinking you are using a USB controller. If Dolphin and your adapter and controller combo are not gelling, install Zadig. It is a driver made by another third party. It should fix the issue.

18 Years separates the era of the Gamecube from that of the Nintendo Switch. The Wii and Wii U made their debut in those years. But more to the point, despite all that time passing, the Gamecube controller is still relevant in the gaming world. As I mentioned before, you can even still use one with the Switch. You have to use an adapter, of course, but still, it has remained in people’s hearts and minds for nearly two decades. That is an impressive feat.

The Gamecube succeeded the N64 in 2001. Twenty years later, it is considered a retro console. But what has really stood the test of time is its odd little controller. It has a mystifying appeal.

Its resurgence began with the release of the game Super Smash Bros for the Wii U. The original Wii was backward compatible. It allowed for the use of Gamecube controllers, but the Wii U did not for some reason. But Nintendo made it right by coming out with an official adapter so that Smash Bros fans could relive the glory days of the Gamecube by using its controller while playing on the new console.

Nintendo didn’t manufacture many of the official adapters, but third parties recognized the demand for such a device and created their own version. It is possible to use them with the Switch in most cases, but Gamecube controllers, whether they be Nintendo or third-party-based, have fewer buttons than the controller for the Switch. So, nostalgia aside, there is some limited functionality depending on the game you are planning to play.

How to Use a Gamecube Controller on a PC: Conclusion

So, now you know how to use a Gamecube controller on a PC, and you are on your way to reliving the good old days. There is nothing like nostalgia to make you feel safe and secure in an uncertain world. Maybe it’s time to get the gang back together and play some Smash. 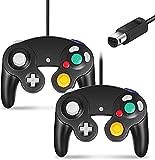 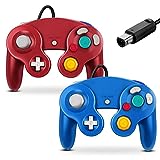