Many people may have the question: What is the Best Milk for a Latte & Why? The stiff foam and strata of color that tops off the perfect latte doesn’t happen by mistake. The art of making a great latte is usually the result of having skillful baristas and high-quality milk products.

Low-quality milk will lead to froth that is limp and foam that disappears. However, making the correct milk choice can determine the difference between a flawless cup, and a cup that should be forgotten.

Farms produce milk with different fat and protein contents, as well as milk with different sweetness grades. However, the quality of the milk being produced will depend on a few different things. First is the diet of the dairy cows, second is the living conditions of the cows, and third is the type of treatment used after the milk has been produced.

To provide an example, researcher Morten Münchow has determined that the best milk for texturing is produced by Jersey cows. This is because of the high levels of protein, sugar, and butter fat within the milk. As a result, Jersey milk has become very popular among producers of  ice cream and artisanal cheese. However, some lower-cost companies tend to avoid Jersey milk because the volume of milk produced is lower. But it isn’t only the breed of cow that comes into play when determining which type of dairy is best for you either. As a matter of fact, unhomogenised milk and free range farming typically are associated with higher quality dairy.

Whole milk can be a barista’s secret weapon. It contains 4% fat, so whole milk can be considered less desirable for someone that is on a low fat diet. However, it also possesses a rich texture that many coffee drinkers prefer. Whole milk is the best option for people who want that rich texture, but don’t have a latte machine at home.

Half-and-half is a blend of milk and cream. It is usually poured directly into a cup of coffee. It has a creamy and dense consistency, mainly due to the fact that it contains 12% fat content. Because of this, you need less half and half in a cup of black coffee than you would in a cappuccino or a latte. Half and half is best when frothed with some type of frothing device, or a latte machine.

Skim or fat-free milk contains zero fat. However, since fat is the primary contributor to a creamy consistency, there is less flavor in this type of dairy. It creates a less “puffy” foam when frothed, which is preferred by most people. Skim milk also possesses a semi-sweet taste, which is not consistent with reduced or whole fat options.

Reduced fat milk usually contains only 1-2% fat and is a great option for someone who is just looking to start adding dairy to their coffee. Reduced fat milk has less flavor and texture than the other option, but low concentration of fat in the product makes up for its shortcomings in other areas.

There is an ongoing debate in the dairy world about which type of milk is better. Is it organically produced milk, or milk that is produced conventionally at a farm? The size of the farm is usually the primary driver in this debate, believe it or not. Local farms are usually better at having their cows treated to pasture feeding, as they are more able to keep a closer eye on their cows, and grass, than a bigger, corporately owned farm.Grain products can also be fed to dairy cows to increase their production, but their diet consists mainly of grass. Usually purely pasture-fed milk tastes better than any other kind of dairy.

Now that we are able to produce high-quality coffee drinks at home, we want to be positive that the coffee we drink is coupled with the highest quality milk products. Thinking about the quality of our milk can help improve your overall coffee drinking experience. When making your choice, you should consider the type of milk, flavor, fat content, and origin of the milk. This is the first step toward making a flawless cup of coffee.

When fat molecules are heated or steamed, the fatty acids will undergo chemical reactions like oxidation. As a result, a stale flavor will occur.

Each component of milk plays a part in its ability to foam or froth, and steaming influences every component of milk. This is why milk temperature can play a vital role in what the best milk for a latte is.

The milk steaming process involves adding hot water vapor to milk that has been cooled until it reaches a temperature that produces the perfect amount of steam. It seems like a simple process, but there are many variables that are involved..

Steaming milk at a temperature of 100 °C can result in browning. This causes milk proteins to form an Amadori product.

As the reaction happens, oxidation and dehydration can occur within the Amadori product. a decrease in nutritional value can occur, as well as an unappealing flavor. In conclusion, you should do everything you can to avoid over-steaming.

If you want high-quality milk, you must get it from a high-quality farm. Knowing the breed of cow that the milk is coming from, the diet of those cows, and the cows’ quality of life are very important when determining the quality of milk. 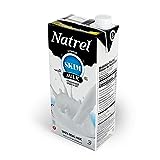 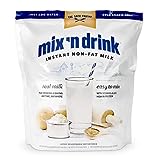