Regarding “are battery-powered chainsaws safer?” they are in a number of significant ways. But whether a battery-powered chainsaw is going to be an option for you will depend on what kind of tasks you intend to perform with your newly acquired chainsaw. Perhaps you’re a homeowner who wants a chainsaw to trim branches on trees. Perhaps you live on a farm or a ranch and are more interested in a chainsaw that can break apart trees and logs. Perhaps you’re a professional circus performer who wants to juggle three running chainsaws for a center-ring act.  Whatever the case may be, the following information will let you weigh the pros and cons of the different kinds of chainsaws out there, and what kinds of tasks they are capable of performing. And naturally, you will also learn a great deal about the safety benefits of battery-powered chainsaws.

Given that electric chainsaws have clean energy and little maintenance compared to their gas counterparts, they seem an attractive option.

Because of new electric models, extremely short battery life is a problem of the past. And the cutting power is outstanding. But there are still some tasks in which a gas chainsaw cannot be matched in power and cutting speed. So even if a battery-powered chainsaw might be the safer option, it might not be a viable option for the task you want to undertake.

A gas chainsaw is a great choice for heavy-duty work. If you have a lot of trees on your property, like a farm or ranch, or need something for professional use, a gas chainsaw is a good investment. Gas saws also come with a wide selection of bar lengths.

Unlike with a corded electric chainsaw, you won’t be confined to working in one area. And unlike with a battery-powered chainsaw, you won’t run out of battery life, so you can work longer if you have the gas supply. Most lithium-ion batteries won’t last longer than an hour, whereas a fueled gas chainsaw can last over the course of an entire working day.

Gas saws are often larger and heavier, so you need to be stronger to handle them and even then they can tire you out fast. They are also much louder than electric chainsaws and require a mixture of oil and gas, which gives off a gas scent. Gas chainsaws tend to be more expensive than electric chainsaws, which may make them less appealing to beginners or those that don’t plan to use them on a regular basis.

Electric chainsaws are lighter and more compact, so they’re not heavy or tiring to carry. They are quieter than gas chainsaws and don’t leave gas fumes in their wake. And rather than having to rev it, an electric chainsaw starts easily at the touch of a button.

Electric chainsaws are best for yard owners for tasks around the home or yard like sprucing up trees, trimming limbs, and cutting small logs.

Although electric chainsaws are smaller and easier to carry, most lack the power to cut down large trees. If you have big trees on your property that you want to remove or cut into firewood, you should consider a gas model.

Electric chainsaws come in two types: corded and battery-powered. Lack of mobility is a serious drawback of corded chainsaws. If you’re using a corded electric chainsaw, you’ll want to buy an extension cord to at least extend your work area a little. Even with the extension cord, there will be a limit as to how far you can go.

If you need more room to work, battery-powered cordless chainsaws will be better. But they often lack the power of a corded chainsaw, placing further limitations on what you can cut.

But Are Battery Powered Chainsaws Safer?

When you’re weighing the pros and cons of electric vs. gas chainsaws, if you don’t have heavy-duty tasks that require chopping up large logs or need a chainsaw for a daily job, you should seriously consider the many benefits of battery-powered chainsaws.

Battery Powered Chainsaws Are Safer For Your Hearing and Neighborhood Reputation

The average gas chainsaw runs at a noise level of 106-117 decibels. Numbers mean little to most of us, so just know that’s a few decibels higher than the sound of a passing motorcycle,

Although ear protection should still be used with the operation of any kind of chainsaw to prevent hearing loss, the lower sound levels of battery-powered saws make them much less likely to contribute to a user’s hearing damage—or to start feuds between chainsaw owners and their neighbors.

Lighter and Easier to Use Can Mean Less Chance of Injury

The significant reduction in both the weight and the hand-arm vibration in battery-powered chainsaws from their gas counterparts makes them easier for laymen to use and even less likely to cause fatigue or injury to long-term users.

For owners who only intend to use their chainsaws occasionally, the low maintenance an electric chainsaw requires is a particularly strong incentive to choose it over a gas model. There are no fuel filters to change with electric chainsaws, and you don’t have to mix fuel and oil before use. All you have to do is keep the bar oil filled and the chain sharp.

Battery Powered Chainsaws Are Safer For Your Health and The Environment

Battery powered chainsaws use clean technology rather than the mixture of oil and gas and create almost no emissions. For the user, this means reduced exposure to petrochemicals and less inhalation of hydrocarbons. Environmentally, it also means zero harmful emissions being released into the atmosphere.

But Never Forget, It Is A Chainsaw

Whether gas or electric, always remember that a chainsaw is a dangerous power tool to handle and it is imperative to always follow the manufacturer’s instructions at all times. If you intend to be working regularly with a chainsaw, make sure you get the necessary instruction and training for how to use and maintain it.

Those who intend to use chainsaws over extended periods of time might also want to consider chainsaw pants, arborist helmets, and suspenders of some type to keep any clothing out of the way.

So Do I Want To Invest In A Battery Powered Chainsaw? 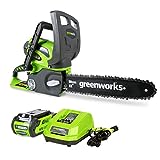 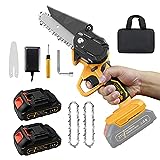 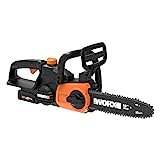